The Tensions are Close, Not Far From Home 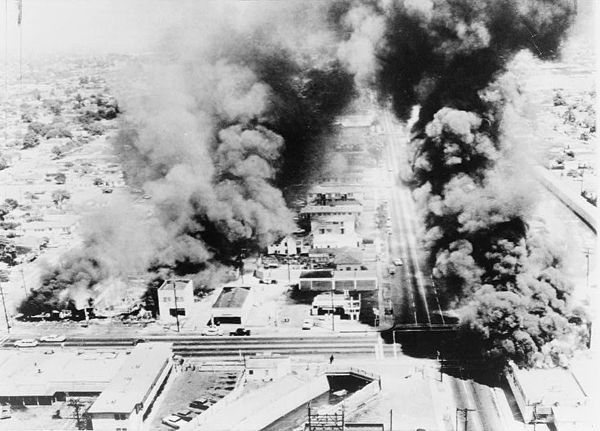 Aerial view of the damages caused by the Watts Riots in 1965.

I can recall my mother’s fear when she found that my brother, John, was participating in the dangerous Freedom Rides leaving Washington D.C. for cities in the South while he was away in Washington D.C. for college. Up until that point, I barely registered the tensions between groups of people within the United States, and knew little about how unequally black people were treated within the United States. When John came back, he told me how some riders were arrested and beat up by the police, and about how black people couldn’t use the same pools or water fountains, sit in the same sections of the buses, or in some places, even be out after dark. John would continue to talk about Civil Rights with me in later years, He told me about figures such as Martin Luther King Jr. and John Lewis, two great leaders that gave him inspiration. While I was always keenly aware of the outside threats from the Soviets and Communism, I never had to think too much about issues of race and poverty because everyone I knew and was friends with was like me: middle-class, white, and doing alright. When my dad got a job in the aerospace industry and my family moved cross-country to El Segundo, I slowly became more aware of the ugly realities contained in my own part of the country. John excitedly called me and Lydia when the Civil Rights Act was passed in 1964, and while we were happy in a general sense, I did not really understand why it was so important because everyone was basically equal, or so I thought. All of the issues seemed far away in the South until the Watts Riots broke out in Los Angeles in 1965, my sophomore year of high school, and the National Guard came to town. While my friends, who were all white because I went to private school, thought of the black people as just being destructive for no reason, I remembered John’s experience on the Freedom Rides and quietly thought to myself that maybe injustice is not as far away as I thought. Afterall, looking back, the way law enforcement treated black people was more like how police treated black people in the “far away” places than like how they kindly treated me and my friends when we encountered them.

← Growing Up as Cold War Kid
Women's Rights are Right for Me →
The Tensions are Close, Not Far From Home