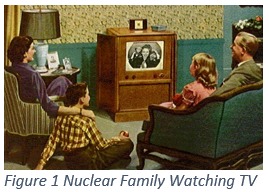 It is difficult to understate the power of television and its impact on the masses.  But it is important to recognize that the power and influences from television can be dangerous, especially when much of the control is directed by the government.  Television was first produced for public sale in the late 1930s, but as author Sam Peterson explains, it wasn’t until after the second World War that "the US saw a boom in cheaper television production" and this revolutionary device became affordable to the average American household.  By the time the cold war loomed over the country, television had become a staple of the nuclear American family.  The image of the parents, and two and a half children gathered around the set has become ingrained in American culture (for example, see Figure 1 [Above]).  But what is the connection between this new technology and the American identity within the cold war.  This essay will explore how television and government became entwined, how the political climate of the cold war made the American household more susceptible to television propaganda, and how the medium’s ability to capture ‘objectivity’ helped solidify the mediums power and convince the masses to fear communism and pursue a specific ultra-American identity. Through careful analysis, it is apparent that the United States government and producers of television became dependent upon each other; and because of this, state sponsored television exploited the political climate and 'objective' nature of television to define the American way of life and promote vigilance against communism leading to the sustainability of McCarthyism, the Red Scare and the Cold War.

To begin, we must look at how television’s infancy necessitated the incorporation of state sponsored programming, and how government and television became interdependent.  Since its inception, television’s survival has rested on two things: funding, and commercial success. Through collaboration, television producers found that both of these necessities where satisfied through collaboration with the United States Department of Defense, founded by Harry S. Truman.  Author Nancy Bernard states that because “broadcasting requires large amounts of funding; centralized media is extremely susceptible to state control” (13).  Producers found that the Department of Defense graciously funded many television programs, and that these programs proved to be acclaimed by the masses.  As a result, more airtime was given to the Department of Defense to promote government ideologies.  Bernard states “in return for the substantial air time donated by the networks, the Department of Defense provided… free programming… public affairs announcements, personnel to appear on discussion programs, archival footage.”  (136) This led to news reels, ‘public service announcements’, documentaries, and many more forms of government supported news, which had a strict bias and agenda to adhere to.  Bernard states that “as a result (of this collaboration), American television content would evidently focus on the West’s position about the Soviet Union, and thus the medium started being used quite extensively as a propaganda tool.” (14)  It became difficult to differentiate what was funded by the Department of Defense, and what was independent.  The Department of Defense was using television to legitimize their policies, while television used the department of defense for support.  It was “mutual dependence between broadcasters and officials, each seeking legitimacy through the other.” (54) The public invention of television became a means of broadcasting government supported ideals into the nuclear family home.  Therefore, propaganda, disguised as television seeped into the lives of nearly every American, and taught the populace how to act, how to feel, and who to fear.