Further, the political climate and advancing technology of the time aided in television's propaganda power.  One of the most predominate examples regards nuclear warfare, and how it mixed with the ‘liveness’ of television to create stronger material that people where especially susceptible to.  And how the paranoia of nuclear warfare forced the public to subscribe to whatever the television, and the government, was promoting.  While the strength of the nuclear bomb had been reported since 1945, it wasn’t until 1951 that it’s true potential and danger was recognized by the public. In 1951, a nuclear explosion was recorded live on television to millions of households.  (Link to broadcast: https://www.youtube.com/watch?v=d5JsrCPWCl8) By seeing the destructive nature of the bomb live, people became terrified of the weapon’s abilities if in the wrong hands, and this paranoia made people more susceptible to an onslaught of political ads warning the viewer about the possibility of a nuclear exchange. One of the most famous political ads that took advantage of this paranoia came during the 1964 presidential election.  It was a political ad by Lyndon B. Johnson entitled Daisy.  Johnson argued that if he was not elected, his opponent Barry Goldwater would bring the country to nuclear war.  The ad features a little girl counting the peddles on a daisy.  A loud speaker interrupts her and starts counting down itself.  The camera zooms on the little girl’s eyes and suddenly a nuclear blast goes off as a narrator explains ‘these are the stakes’. (Link to ad: https://www.youtube.com/watch?v=dDTBnsqxZ3k) Although only aired once, as explained by author Robert Mann, this ad played a large role in convincing the American people to vote against Goldwater, fearing he would lead them to nuclear warfare.  Because of the intimidating power of the bomb which the populace could not control, it only made sense to put their faith in the abilities of the government.  Televised reports of Russia developing their own nuclear arsenal, brought more uncertainty to the people.  Bernard argues that “the first skirmishes of the cold war convinced all but the most dogmatic defenders of free enterprise that only the government had the oversight necessary to control information campaigns that would vanquish world communism.”  (12-13) This is a dangerous ideology, as it restricts the individual to think for themselves, and puts the general trust in the government, which dismisses the integrity of democracy where the people think for themselves.

To continue, propaganda through television proved extremely effective due to its nature of capturing ‘objectivity’.  Unlike other means of propaganda such as film, literature or posters, which often portrayed cartoonish or over-the-top caricatures that could easily be dismissed as exaggerated, television captured ‘reality’ in a way no other medium could.  Author Alan Nadel writes, “from its outset, television staked in the American imagination a unique claim on veracity, which emanated from its capacity to broadcast ‘live’ and to support its assertions with visible ‘proof’” (526).   But this was a dangerous conclusion.  As is apparent today, the camera can lie, or tell fragmented truths.  But when the technology was young, whatever the camera captured was taken as indisputable by the general populace.  In one such video, simply entitled “Communism”, there is an early scene in which archival footage of the Russian army, an armory factory, and Russian Leaders are demonstrated.  The narrator states “here in Russia, you see the reason why so many nations are building up their defenses… why we are spending billions of dollars in defense production.  Why your family is paying the highest taxes in our history.” (Link to video: https://www.youtube.com/watch?v=_4yjAb6eoCw&t=14s) By incorporating specific footage, and presenting it as a truth, it is understandable how effective propaganda could be.  The objectivity of the footage is disgraced by statements that arguably do not correlate.  For example, the film combines raw footage, which is taken as fact, and combines it with broad statements such as ‘your family is paying the highest taxes in our history’.  By correlating a statement with undoctered footage, whatever arguement that was being presented was also taken as truth. To further abuse this concept of ‘realness’, lines between fiction and reality, spectacle and documentary, began to alter as the Department of Defense began investing in Hollywood techniques to push their ideologies.  It was common that there would be, per Nadel, the “staging (of) events when appropriate archival footage was unavailable” (528), and television producers where given access to military equipment to realize their projects, so long as it corresponded to the proposed agenda.  Stories where starting to be told similar to that of film and fiction, with notable casts and exaggerated spectacle.  But by being on the small screen, it had more authority regarding fact, and was often taken as such.

In conclusion, television and the Department of Defense had the trust of the American populace, and used this trust to spread proper American and anticommunist agendas.  The political climate and the ability to capture objective truth brought authenticity to television, which allowed for some of the strongest propaganda in recorded history.  This essay is not meant to debate if the ideologies pursued where reasonable, logical or led to positive outcomes.  It is simply meant to argue the power and influence television had during the cold war.  But it is clear that the invention of television during the cold war had a great impact on the history of propaganda, and the history of America.  Perhaps it is our duty to be careful with such a tool. 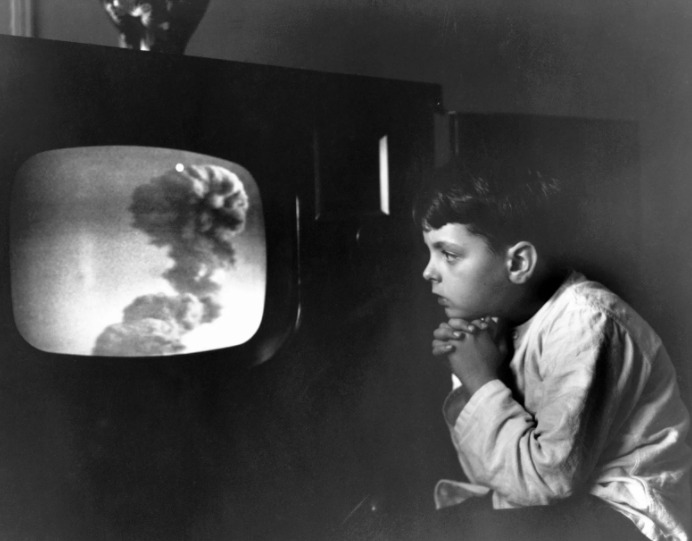