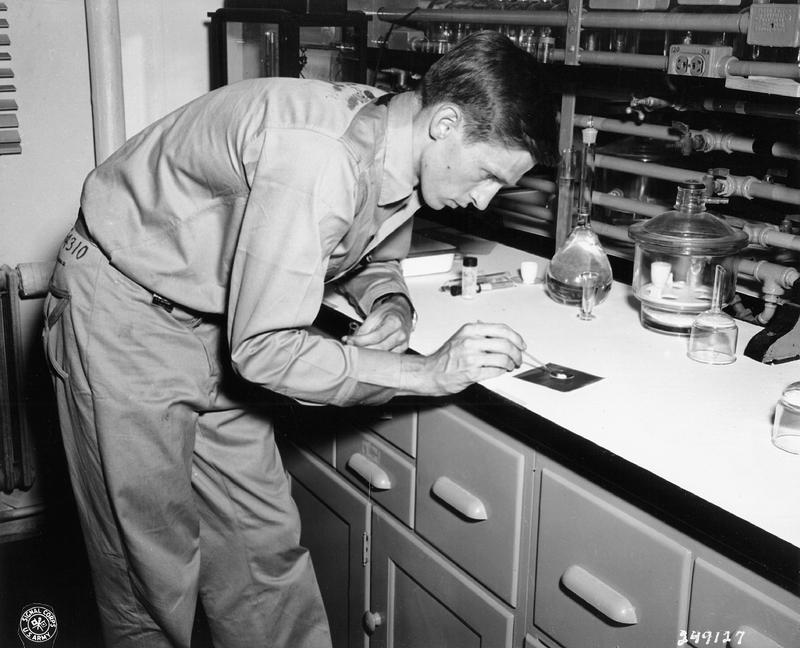 Competition Between Pure and Applied Science: Applied Wins. A research chemist working at Clinton laboratories nuclear research center, operated for the government by Monsanto Chemical Co., in 1946. By this time, science, technology, government, and industry were extremely intertwined and applied science had permeated goals of academia.

Competitions between industrial scientists, academic scientists, and inventors also fueled the evolution of research and development. Prior to and throughout World War I, long-standing atagonism between academic and applied science kept the work and projects of scientists, engineers, and inventors relatively separate. Committees sponsored by the World War I effort heightened these tensions and produced highly public competition. A prime example was the competition between the Naval Consulting Board and the National Research Council during this time. As war erupted in Europe, the United States watched anxiously and worried about being cut off from European naval technology as well as falling behind in war-driven technological advances. In 1915, secretary of the Navy Josephus Daniels asked Thomas Edison to act as a civilian advisor to the navy on problems of invention and development. Edison agreed and the pair established the Naval Consulting Board, which was to be a group of representatives from eleven professional societies of engineers, inventors, and scientists organized under Edison's leadership. However, Edison and Daniels deliberately excluded the American Physical Society and the National Academy of Sciences were from having members on the board. The omission reflected the scorn of inventors like Edison toward academic science, which, at the time, was generally associated with physicists. In addition, inventors largely professed the opinion that theory-based, academic science was not useful for the radical innovation the war needed.

Despair over the exclusion from the Naval Consulting Board spurred George Ellery Hale, foreign secretary of the National Academy, to push the academy to offer itself to the government. Hale was clearly motivated by competition for domestic recognition as well as international prestige. In a 1915 Science article, Hale called for the construction of a building for the academy, and stated that, if achieved, “the Academy will be greatly able to extend its influence and usefulness both at home and abroad… Under present conditions the International Associations of Academies could hardly be invited to meet in Washington. But if established in a home of its own, the Academy might ultimately succeed… as the leading Academy of the Association”(22). Hale’s associates were at first reluctant to involve the academy in political affairs and initially rejected his request to serve as war effort consultants. However, after the sinking of the Sussex in 1916 and President Woodrow Wilson’s subsequent ultimatum to Germany, the National Academy offered itself to the government and appealed to President Wilson by promising to organize an arsenal of science. This led to the formation of the National Research Council, which, according to Hughes, was designed to “promote cooperation among the nation’s research institutions and among leading scientists and engineers”(123). It is evident that the competition between Edison and ideals of invention on the one side and physicists and academic ideals on the other helped to propel the National Academy to take steps to take part in the formation of a government sponsored body and, consequently, contribute to the bridging of the gap between pure and applied science.