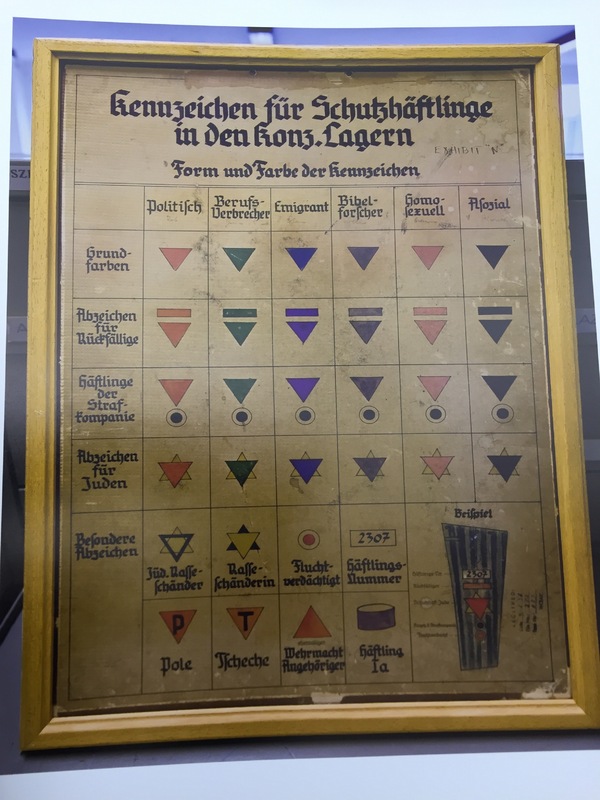 In addition to gas chambers in concentration camps and the V-2 rockets developed during the war, Nazi Germany also relied on the technology of systematic categorization to execute political policies. Pictured here is a digital print of an intake chart that hung in the central registration area of the Dachau concentration camp outside of Munich. The Dachau concentration camp was established by the Nazi government in March 1933 and was the regime’s first regular concentration camp. The title of the chart reads “Badges for Prisoners in the Protective Custody in Concentrations Camps.” The combination of shapes and colors to represent an array of possible identities reflected the logic of the Nazi government’s racial policies. The chart also demonstrates the power of printed language to enforce an ideology and subjugate a group. Likewise, the table-form reflected a scientific layout of established categories in way that rationalized Nazi racial logic. The tidy organization of the groups and method of identification allowed the Nazi regime to unambiguously establish enemies and facilitated the visible labeling of prisoners upon entry into the concentration camp. Language itself is a technology, and the Nazi party effectively mobilized scientific rhetoric to justify their ethnic cleansing. Though Dachau was designated as a concentration camp for political prisoners, as opposed to the more conspicuous systematic murder that occurred at camps such as Auschwitz, it was also, like other concentration camps, a center of medical experimentation. As one of the focuses of the medical experiments was to advance Nazi racial and ideological principles, charts such as this at Dachau most likely streamlined the selection of subjects as well as the documentation and record-keeping process. The Dachau Intake Chart thus reflected the scientific and logic-based tenets that fueled Nazi technology of war and genocide. Viewing this chart in the large, digital print form emphasized the daunting nature of the tabular categorization and dehumanization it enforced.