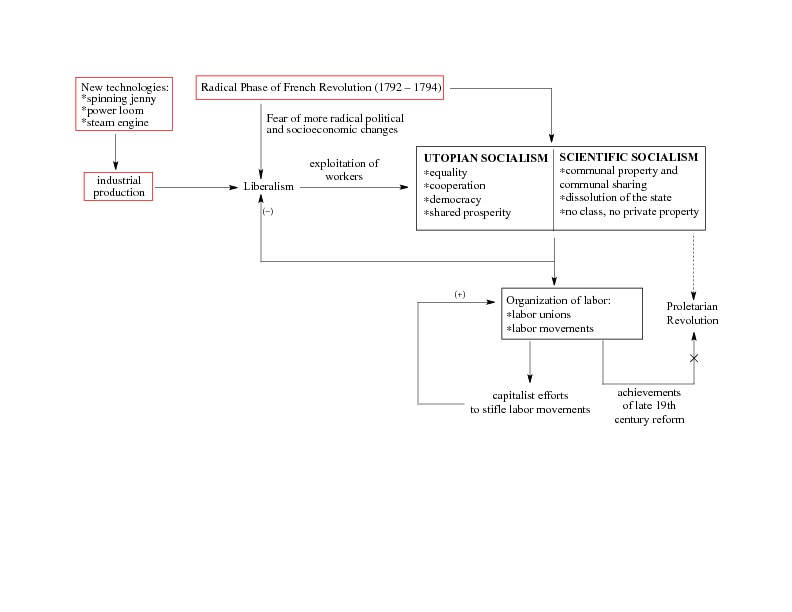 Figure 2. Socialism was a reaction to Liberalism. Though the industrialization raised the status of the middle class, it also formed a new class of laborers, the proletariat, who were arguably less favored by the new modes of production. The figure demonstrates that Socialism, which concerned itself with the plight of the proletariat, was actually a product of Liberalism. Socialism directly rejected the liberal ideals of the rights of property as well as the idea that the wealthy inherently deserved their wealth. They critiqued liberalism on their stances on liberty and equality, arguing that liberalism merely protected property of the few who had it and did nothing for the rest of the people. Given the ideals of the French Revolution and the radical period that followed, it is not surprising that the first socialists were French. These early Utopian Socialists advocated for equality, cooperation, democracy, and shared prosperity. Karl Marx criticized Utopian Socialism and proposed his alternative of Scientific Socialism. He elucidated his form of socialism in The Communist Manifesto, which criticized capitalism and called for a revolution of the working class. Marx argued against the capitalist organization of the economy as well as the use of machine labor on the grounds that it reduced the worker to an insignificant piece of the labor-process, which accumulated wealth in a small proportion of society while the rest labored in an exploited, miserable state. Indeed, there was a fair level of exploitation of the laborer for much of the nineteenth century. Both factory and urban conditions were wretched, and laborers worked extremely long days doing highly strenuous labor. The feedback loop thus depicts this exploitation as a pathway from Liberalism to Socialism. The figure also shows that Socialism led to many labor movements with Socialism as their goal, represented as the organization of labor. This organization led to capitalist efforts to undermine this organization, which actually reinforced the movements. Additionally, the dotted arrow demonstrates that Marx anticipated a complete upheaval of the social order by a proletariat revolt, which was never realized. Part of the reason this did not occur was because late 19th century socialists adopted goals for reform, rather than revolution (arrow with X across it). Lastly, in promoting their ideals and achieving certain reforms, Socialism is shown providing some negative feedback to Liberalism.