At this time when Maximilien Robespierre professes that terror is an appropriate means to protect the popular government that now rules France, a government that my parents as well as my younger self could never have envisioned for our nation, I feel that it is appropriate for me, Jacques Griezmann of Rennes, to reflect back upon the life I have lived up until this year of 1794. It is firstly obvious that I witnessed the complete overturn of the Old Regime and the previous social order in France. I personally had a hand in drafting the declaration that was poised to promise the Third Estate liberty, not the frenzy and fear of this period. As an accomplished lawyer, I have been a part of a group of educated and competent men that challenged the structure of the Old Regime and its roots in the inequality of rights and privilege that favored noblemen of scanty education, motivation, and ability. We professional men, my fellow lawyers and the other men of status and wealth–the merchants, physicians, and men of industry–rose to a level of wealth and status unheard of in the first half of this century. I now shall tell my story.

At the age of fifteen I decided to follow in my father’s footsteps and pursue a career in the law. My father made a nice life for my mother, sister, and I as an advocate in Rennes. I was born on the 11th of January, 1740 and spent my youth in a home owned by my father. It was a modest home, not rich hangings or furnishings but with a large fireplace and a room for my sister and I, separate from our parents. We ate well and were schooled. As a young fellow, I saw the degree to which the destitution of peasants compared to the luxury of nobles, many of which held higher positions than my father and yet were less educated. I also grew up hearing my father talk of lawyers that had become extremely wealthy and lived like nobles, some living entirely off their wealth, others who had joined the courts and earned title of nobility. It was my ambition to study the law and surpass the success my father had achieved to therefore become a lawyer with status.

My early life was thus dedicated to the studies that would bring me to such a position. I remember much of my adolescence and early adulthood as having my nose in a book. Even as a young boy, however, I could not avoid the distraction of all the events occurring within France and our possessions abroad. I was born shortly before Frederick the Great invaded Silesia, and lived my early life as our country battled in the War of of the Austrian Succession. Although I was only eight years old when the Peace of Aix-la-Chapelle ended the war, I was well aware of my father’s dissatisfaction with the return of France’s conquested lands. I also saw the beginning and end of the Seven Years’ War during my early manhood. During the fighting, while I was still engaged in university studies, my father remonstrated the intense taxation. The war ended in 1763, the first year I had started practicing law. My friends, colleagues, and I conversed in the cafés about the inadequate management of the whole affair. For me, it was that failure that seeded the beginning of my understandings of the wretched incapability borne of the nonsensical social organization the Old Regime.

As a young man striving to build a career, the heavy taxation ordered to meet the demands of the Seven Years War, both during and after, weighed heavily on my wallet and my mind. It stood then as it does a now a travesty that we, the men of ability, whose work actually sustained this nation, were expected to empty our pockets for the Crown’s overseas holdings, while the privileged class romped around free of taxation but eager to collect from the Third Estate. France lost the war because we could not fund our military, and because of losing the war we signed away our North American possessions that once brought wealth to the nation and our men of industry. Even after that disastrous loss and the growing debt, Louis XV insisted on augmenting the navy and, consequently, our debt. All of this to be paid by increasing the taxes on the most industrious men and the commoners who fought in the war. If anything useful came of the Seven Years War, it was the blatant demonstration of the corrupt social and political order that allowed the privileged nobility to live at the expense of the citizens engaged in agricultural, industrial, and distinguished professions of law and commerce that were the true foundation of the nation.

Despite these frustrations, I committed myself to my work and the pursuit of success. I initially made my way by drawing up family papers and then worked up to practicing in the courts. All the while I worked to make a living, pay the enormous sums collected by the state, and earn my place of honor, the extravagances of the royal family increased and the nobility remained unscathed by the surrounding economic crisis. I nonetheless amassed a modest amount of wealth, purchased a residence in a neighborhood amongst nobles and other wealthy commoners, and married my wife Marie. By the time King Louis XV died in 1764 and was succeeded by King Louis XVI, I had been elected to the general assembly and was involved in managing the affairs of Rennes. This position brought me honor in status but none of the plentiful privileges of the nobles. What’s more, I had given much effort to attaining a position in the higher courts but was barred from the post because of my common birth. All the while it was obvious to me and the grand majority of our city that my so-called “common birth” was irrelevant when considering the real contributions I made to our city. I was a man with education, wealth, and status, respected by my fellow men and engaged in a profession without which France would crumble, but I was denied the political sway that was meanwhile granted to idle and frivolous nobleman. Alongside my friends and colleagues that were locked in the same absurd position, I grew bitter and angry at the crooked and frankly nonsensical system that placed uneducated, lazy, and incompetent nobles in offices that I was much better suited to fill.

As I exercised law and managed the affairs of my city, the nobles established their own seigneurial courts simply out of their inherent “right” to do so. They established these courts and usurped our city justice systems, enforcing “law” on the inhabitants with punishments that were ten-fold harsher than the crime. Of course, such punishment was only inflicted on the commoners, while the same crimes committed by a noble or friend of the court were left untouched. These injustices, along with the desperate pleas of the farming classes to curb the nobles from hunting on their fields and the heavy taxation that continued to support Queen Antoinette’s insatiable need for luxuries of all kinds, turned my ambition for noble title into a loathing for noble privilege. I nevertheless remained occupied by the numerous affairs of our city, what with the kingdom’s support of the American Revolution putting more burden on the commoners that did not have the money to spare. For all the woe the increased debt inflicted on our people, the King’s calling of the Estates General eventually brought me the influence I had always envisioned for myself.

I took part in the local assembly that drafted the cahiers de doléances for Rennes that would be considered at the assembly. At that point my colleagues and I only sought the removal of barriers from our entry into higher offices, the disposal of the noble privileges that instituted those barriers and other injuries, and the general restriction of various noble abuses that hurt peasant agriculture and general means of living. I was then elected as a deputy to represent Rennes in the Estates General, which convened in Versailles on the fifth of May in 1789. There is no need for me to account in detail the occurrences of that unfruitful meeting–the refusal of the Crown to grant voting by head would have stifled any justice and was not something the Third Estate could stand for. To think that the Crown attempted to suppress the hence formed National Assembly by barring us from our proposed meeting place that very next day is now humorous. I can still feel the energy and promise of the solemn oath my fellow men and I took on that tennis court. 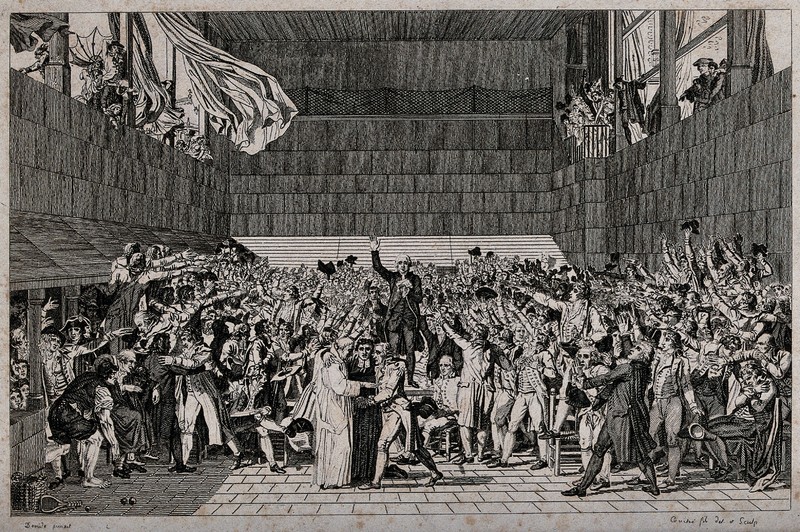 A sketch of the National Assembly when we asserted the independence of the Third Estate and swore to write a new Constitution for France.

Although I was hopeful and ready for social and political change, I cannot claim complete bravery. I wondered what it would mean to abolish a nobility, when I, as a lawyer,had once enjoyed near-noble honor and respect from the commoners. My nerves were slightly calmed when the members of the Court joined our National Assembly, but once again shaken when the Crown moved troops into Paris. The storming of the Bastille in July and the peasant rebellion that swept the nation around the same time had me worried that our undertaking was moving out of the hands of us rational and able men. Nevertheless, with the feudal regime abolished, there was no choice to stay with the Revolutionary cause. Setting to work on the Declaration of the Rights of Man and Citizen soothed some of my anxieties. My wife expressed anger that women were not included, but I remained firm that such a measure was not in the interest of France. I was enlivened by the idea of living under a France nation that would protect my property and allow me an equal chance at the positions of high office I had always wanted, but was simultaneously troubled by some of the more radical suggestions put forth. The year of 1789 realized my hopes for social change but also tested my notion of what that equality would mean.

Now I see that this primitive fear was more justified that I had previously imagined. I maintain that all the unrest of 1789 was worth the realization of the Declaration of the Rights of Man and Citizen and the Constitution we issued in 1791. Working as a member of the National Assembly was the power I had always dreamed of but in a form I could have never imagined. However, I can feel that the tension of the nation cannot be sustained. Antoine-Laurent Lavoisier, our nation’s great chemist who developed a method for refining saltpetre into the gunpowder we so desperately needed to win the revolution, was celebrated in the great armaments festival just two years ago, and has recently been murdered. How can we murder the scientist who made so many advances for chemistry in the name of France? How can we disband our Academy of Sciences, sure to bring France great recognition, when England’s industry is greatly more sophisticated than ours? The greatest invention of France of recent has been the improved guillotine, and it is used to kill off our men of greatness. The France I had envisioned was lead by the educated, able, and wealthy individuals that could steer our nation in the right direction, now these men are being murdered by Robespierre’s Terror. I did not foresee or hope for the republic that has been established. I write this memoir in the year of 1794 as I watch Terror take the lives of the citizens that the Revolution was meant to serve. I fear that if I speak at all, or breathe too loudly, I will be next.