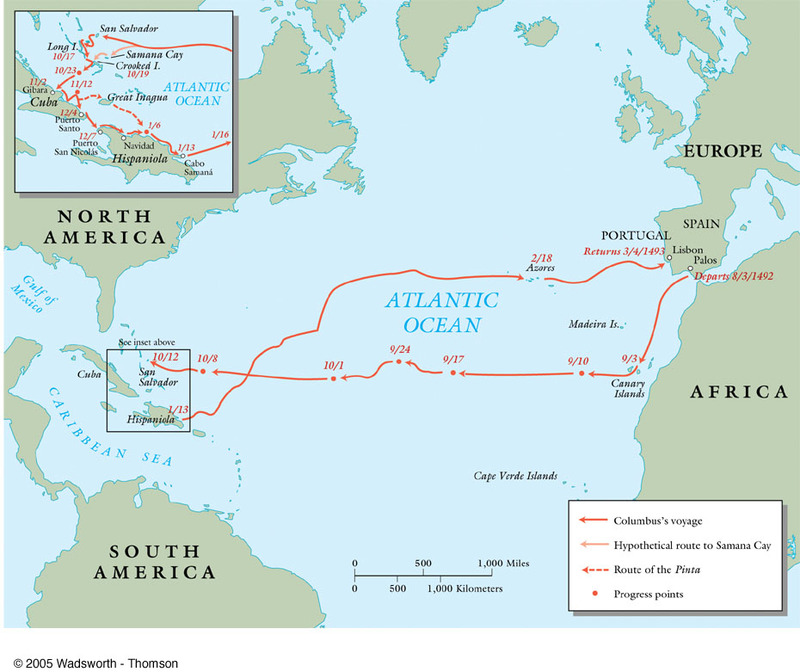 The Route of Columbus's First Voyage

The two sides of the Columbian Exchange experienced inverse effects that aided the people of "Old World" and wiped out the indigenous population of the "New World," allowing European expansion to thrive. The Exchange, the effect of European expansion, took everything away from Amerindians and gave it all to Europeans. Colonialism reared its ugly head and claimed victory for its proponents.

Columbus’s voyages across the Atlantic would have been impossible were it not for the critical advancements in shipping technology of the fourteenth and fifteenth centuries. At this time, two types of ships were prevalent. Northern European ships were heavier, round-hulled, and flat-bottomed with square sails. Southern European ships (called “caravels”) were round-bottomed and boasted lateen (triangular) sails. Toward the end of the thirteenth century, inter-European trade increased, giving countries of northern and southern Europe “an increased opportunity to examine each other’s ship types”(Clydesdale, 50). By combining the best components of each type, the ‘carrack,’ a ship with two masts/sails (one square after northern ships and one triangular after southern ships), was created. With the addition of a third mast and changes in hull-shape and steering mechanisms in the early fifteenth century, the carrack became the ‘full-rigged ship,’ Europe’s first vessel “capable of long ocean passages”(Clydesdale, 51). The ships Columbus used “embodied the latest technology and included two modified caravels (the Pinta and Niña) and one carrack (the Santa Maria)... [and] after modification, all were fully rigged ships with three masts and a combination of square and lateen sails.”(Clydesdale, 56) 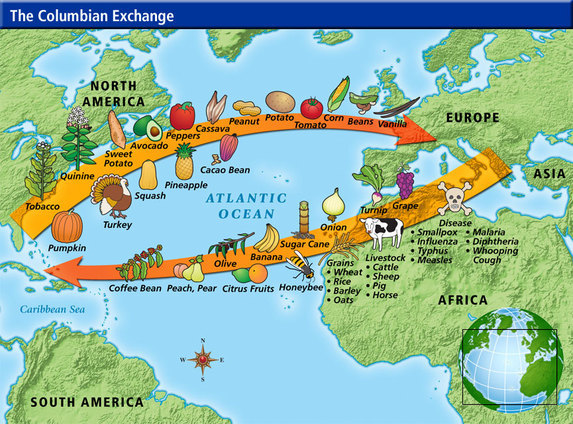 Columbus’s first voyage in 1492 marked the start of the Columbian Exchange, the transfer of plants, animals, technologies and diseases between the "Old World" (Europe, Africa, and Asia) and the New World (the Americas). Beginning at the end of the fifteenth century, the Exchange lasted through the sixteenth century. This was a time of great economic and colonial growth for Europeans and the beginning of the end for indigenous Americans.

European explorers brought with them the coffee beans, olives, bananas, grains, honey bees, sugar cane, grapes and livestock, but they also brought with them a plethora of diseases that Amerindians did not have the immune systems to fight. Among these were influenza, typhus, malaria, and measles. Smallpox, however, was the most devastating to the indigenous population. By 1605, the disease had caused the native population in Central Mexico to decline “from about 18 million at the time of contact to approximately 1 million...” (Stearns, 110). In 1521, a member of the Aztec people wrote about the smallpox epidemic taking place in Tenochtitlan, the Aztec capital.

It was in Tepeilhuitl that it originated, that there spread over the people a great destruction of men… There was indeed perishing; many indeed dies of it… No longer could they move, no longer could they bestir themselves, no longer could they raise themselves… Indeed many people died of them [smallpox], and many just dies of hunger. There was death from hunger; there was no one to take care of another; there was no one to attend to another… At this time this plague prevailed indeed sixty days— sixty day-signs— when it ended, when it diminished; when it was realized, when there was reviving, the plague was already going toward Chalco. (Stearns, 111)

The diseases brought by the Europeans spread throughout the continent and destroyed a multitude of people groups.  Over the next century, the indigenous population throughout the Americas “declined by about 90 percent.” (Stearns, 110) 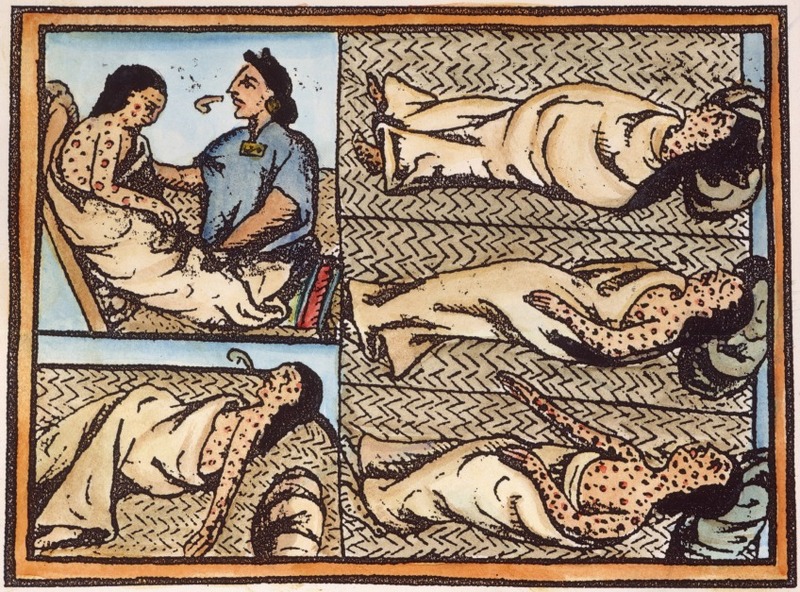 While the population of the "New World "rapidly declined, the opposite happened in the "Old World." From the Americas, European explorers brought back tobacco, avocados, tomatoes, beans, vanilla, cacao, potatoes, maize (corn) and more. Of these, potatoes turned out to be the greatest proponent of population increase, as they were fairly easy to take care of and grew quickly. They were profitable, as “an acre of potatoes [would] produce… three times the quantity [of food] produced by the acre of wheat… [and was] cultivated with less expense than an acre of wheat.” (Stearns, 116) Scottish economist Adam Smith saw the introduction of potatoes into European society as not only a proponent of population increase but also as an economic stimulant.

Should this root [potato] ever become in any part of Europe, like rice is in some countries, the common and favourite vegetable food of the people, so as to occupy the same proportion of the lands in tillage which wheat and other sorts of grain for human food do at present, the same quantity of cultivated land could maintain a much greater number of people, and the labourers being generally fed with potatoes, a greater surplus would remain after replacing all the stock and maintaining all the labour employed in cultivation… Population would increase, and rents would rise much beyond what they are at present…. (Stearns, 116)

Though the crops introduced to the "Old World" through the Columbian Exchange revolutionized society and altered socioeconomic relations in Europe, the brutal hit the indigenous peoples of the New World took cannot be swept aside. Through colonialism, Europeans took from others and gave only to themselves.