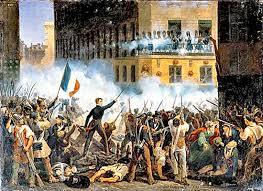 This journal was found in 2017 in La Biblioteque de l’Arsenal. The entire journal has been translated from its original French text and is now printed below.

I received this journal two years ago as a gift from my mother-in-law on my birthday.  She told me her grandfather, whom neither of us knew, had kept a journal; and that it was because of his journal that he was not forgotten, even thirty years after his death.  I find it strange how some people do great things, yet are completely forgotten a year after they are buried.  This is my greatest fear; not death (that’s natural), but rather being forgotten.  Perhaps it is this brewing revolution that reminds me of my great-grandfather in law, and thus, this journal.  Even though I’m a complex being who has led a diverse life, like most people here in Paris, I know I will only be remembered in regard to revolution.   I was born in December 1812, right here in Paris.  I am the only child of an upper middle-class family. My father was the proud owner of a moderate cotton mill, about two miles from city hall.  When I was born, we had approximately eighty workers in the factory, but by my teenage years that number nearly doubled.  My family had been living in Paris for decades, before everyone started changing from rural to city life in search of work.  We took advantage of this new labor force, and soon, we invested in forty spinning mules and thirty cotton gins (among a few other little machines), and found ourselves respectable players in the cloth industry.  We didn’t own land, other than the foundation of our factory, but we were happy.  My family heritage follows a long line of weavers, but none were half as successful as my father.  My grandparents hand-stitched every article of clothing, my grandma would spin the wool, and my grandfather would do the weaving.  It made sense that my parents would further the legacy by opening a factory and using the new technology to mass-produce for the community.

My first memory is of my cousin returning from the Battle of Waterloo, having suppressed Napoleon’s forces during the ‘Hundred Day War’.  I was only three years-old, so any remnants of Napoleonic rule hadn’t the chance to seep into my life.  It’s funny how my first memory is sourced from revolution.  I haven’t seen my cousin in years.  Perhaps I should write him a letter.  The first king I remember living under was King Louis XVIII, although I was only twelve when he died, and didn’t care much for politics.  Louis XVIII died childless in 1824 so his younger brother, Charles X, usurped the throne.  I remember this fact because I was slightly heartbroken that a legacy could be so easily tarnished.  Charles X had much grander ambitions than his brother, and followed a more absolutist ideology, which appeased some of the local Ultraroyalists, but not my family.  My parents raised me liberal, and I have had no reason to alter this philosophy in any way.  My father would often complain that Charles X had disobeyed the constitutional monarchy that his brother established, and that he only cared for the nobility.  He believed the King had forgotten the working class.  I have heard employees remark that my father was a hypocrite, and that he only cared for his factories success, and not the people work in it.  They complain of the conditions in my family’s factory.  I would often here people complain “the hours are harsh; the air is musty, and the cotton seeds contaminate all the food”.  My father’s philosophy was: if you don’t like the conditions, find work elsewhere.  My father was strict against socializing in the factory and was very punctual regarding the employee’s time.  I once saw him fire a scrawny man for being ten minutes late to work; it was his third time in three years.  They complain, but my father produced jobs, and was very successful in the family industry.

When I turned eighteen, I noticed my father’s friend, Hugo Sarkozi, came to our house more often to vent his grievances.  Hugo ran a liberal news publication called Le Circle Rouge, a paper that I often found my father reading in the evenings. Many found it odd that the owner of a cotton mill was friends with a news publisher.  They met in a coffee house many years ago, and took a liking to discussing liberal politics with one another.  Hugo would often complain about the rising poverty line, the broken economy, civil unrest and the king’s desire for absolutist rule.  Sometime in July, I believe it was the 26th, Hugo barged into the house with my father.  He was stammering about what I would later discover where called the July Ordinances.  These where a list of rules established by Charles X to maintain order and power in France.  Out of all the unethical ordinances that arose at this time, none infuriated Hugo and my father more than the suspension of the liberty of the press, and the suspension of their right to vote for members of the Chamber of Commerce.  Right before barging in, Mr. Sarkozi’s publishing house had been raided by the police.  As stated before, Charles X had banned most all means of the press, so practically all of Hugo’s papers were confiscated.  Anyway, in our house Hugo was screaming “they’ve seized everything! All of our papers, gone.” I believe he was crying.  I was writing a letter when they came in.  I hadn’t noticed anything unusual that day, except maybe the dry heat that kept me inside.  Hugo and my father grabbed me, and led me to the front door.   It was here that I finally heard the chanting.  It was hard to make out at first, but the second I stepped outside into the crisp night, between Hugo and my father, the words were unmistakable.  “Down with the Bourbons, long live the charter!” rang down the city streets as the mobs marched.  We strolled along the streets of Paris amidst the chanting crowds.  All the strung-up lamps swayed in the wind, as they waited their turn to be smashed by discontented protestor.  Most of the lamps had been shattered by late evening and it became far too dark to see, so we went back home. That was my first real taste of revolution.