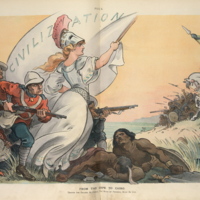 This cartoon depicts the Civilizing Mission, the justification used by European colonizers for their interventions and operations in Africa and Asia during the 19th century. 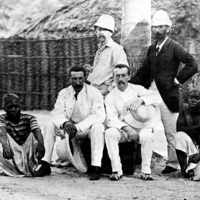 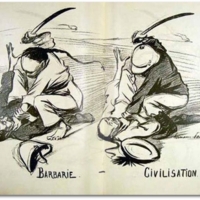 One of the justifications used by European colonizers for their actions was that of the Civilizing Mission, the idea that Europeans can "civilize" the African "savages" or "restore" Asian societies to their former glory through intervention. Part of the ideology driving the civilizing mission lies in the technological differences Europeans observed between themselves and the rest of the world. Europeans felt that by bringing their technology to those without, they would not only be able to learn how to recreate those technologies, but also learn the attidues and beliefs that Europeans believed enabled their success and stability as great countries of power. For example, the railroad, a machine, not only served as a means of travel, but it also embodied the punctuality, speed, rationality, and impersonality Europeans valued. Civilization would also be used as a justification for war, as shown in the "From Cape to Cairo" comic above left. The comic depicts Britannia, personified as a white goddess, holding a flag of "Civlization" and leading British men in the charge against barbarism. The British are shown clothed and with guns. In comparison, native peoples are depicted as dark "Barbarians" and have inferior weapons. Thus, some Europeans saw themselves bringing civilization to the uncivlized, even if that meant using weapons to do so. Similarly, missionaries not only exposed native peoples to Christianity, but some also taught in schools and served as medical asisstants, as shown in the second image. In that way, Western religion also was caught up in the ideals of the Civilizing Mission.

Not everyone had full belief in the validity of the civilizing mission. This is higlighted in the third image, which quesions why a European man beating an Asian man is "civlization", where the reverse situation is marked as "barbarism." Similarly, G. O. Trevelyan observed that all the supposed signs of civlization that the railroad brought to India "disappeared one-yards of either side of the railway track" (Adas 74). Thus, not all Europeans thought the Civilizing Mission was successful or truthful in its aims.