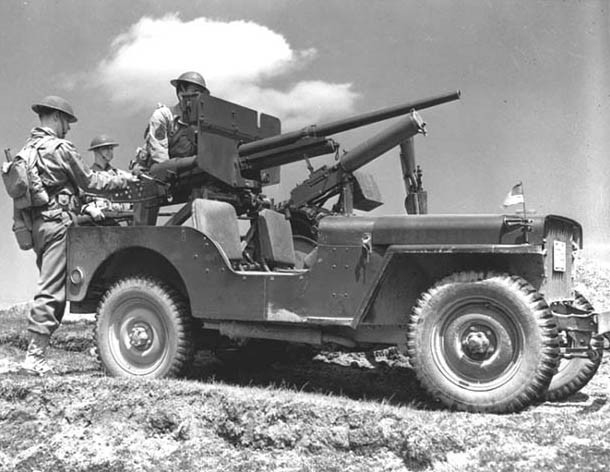 Willys MB with 37mm cannon, US 3rd Infantry, Newfoundland, 1942. The Willys MB would go on to become the Post-War civilian Jeep.

US Military Technology that Made the Mainstream

Nothing is more iconic to American culture than the Jeep. The first Jeep was the Jeep CJ, which was a civilian version of the Willys MB, a military light utility vehicle that was produced by Ford from 1941 to 1945 (World War II Database). The Willys MB spawned an entire category of consumer car -- the recreational 4 wheel-drive vehicle (Jeep History Throughout the Years). The post-war popularity of the Jeep is a perfect example of the way that a military technology can influence a culture.

The Jeep was invented by the US military to be a fast, cross-country reconnaissance vehicle, and that same technology -- while used for different purposes -- was attractive to consumers after the war as well (Jeep History). American consumers appreciated the utility of a 4 wheel-drive, and it created an entirely new industry based around them, open to further innovation and profit. The Jeep is a demonstration of the United States military developing something out of necessity during wartime, and then allowing that technology to be utilized, refined, and exploited by private companies post-conflict.

Like many military technologies that go mainstream, the Jeep had a huge impact on American culture, as a tangible and purchasable icon of American ingenuity. As American culture has developed and changed since WWII, so has the Jeep and the category of vehicles it spawned.

In 2016, 12.2 million microwave ovens were purchased in the United States, and they can be found in just about every American home (Statistica). But not many people know the origin story of this helpful little appliance -- that the microwave oven was invented by accident, in a US military funded lab during during World War II.

The microwave began as the cavity magnetron, an essential piece of radar technology developed by the British and shared with the US military during the early years of the war (Engineering and Technology History). Combat radar equipment was of paramount importance to the military, and Raytheon won the government contract to develop it further. This contract was largely brokered by Raytheon’s power tube division chief, Percy Spencer.

One day, while working on radar technology, Spencer noticed that the chocolate bar in his pocket had melted. He began to study this phenomenon, and by 1945 had registered a patent for the Radarange, the world’s first microwave oven (New England Historical Society). It was six feet tall and weighed nearly 800 pounds. After the war, the technology behind the microwave oven was refined further, and by 1967 a model was released for civilian consumers.

Now, microwaves are a staple of every American kitchen, from mansion to apartment, and can be purchased for less than $40. We think of them today as commonplace, but when the microwave oven was first invented by Percy Spencer, it was revolutionary. And it has been revolutionary, transforming the way people purchase, consume, and think about food.

M&M’s, another cultural icon, were developed specifically for American troops deployed overseas (History Stories). The innovative chocolate formula encapsulated in a hard sugar shell was designed to withstand the harsh conditions of war. The shell meant that the chocolate was less prone to melting, and wouldn’t rub off on the soldier’s fingers. The small individual paper wrappers allowed M&M’s to be easily packed and shipped as a part of a soldier’s food ration.

During World War II, M&M’s were manufactured exclusively for the US military. After the wartime quotas were lifted, M&M’s were allowed to be sold to the general American public. Servicemen and civilian alike loved the small chocolates, and they have been a cornerstone of American candy -- and culture -- ever since.

The Sky is the Limit →
Cars to Candy