The Future of Meat 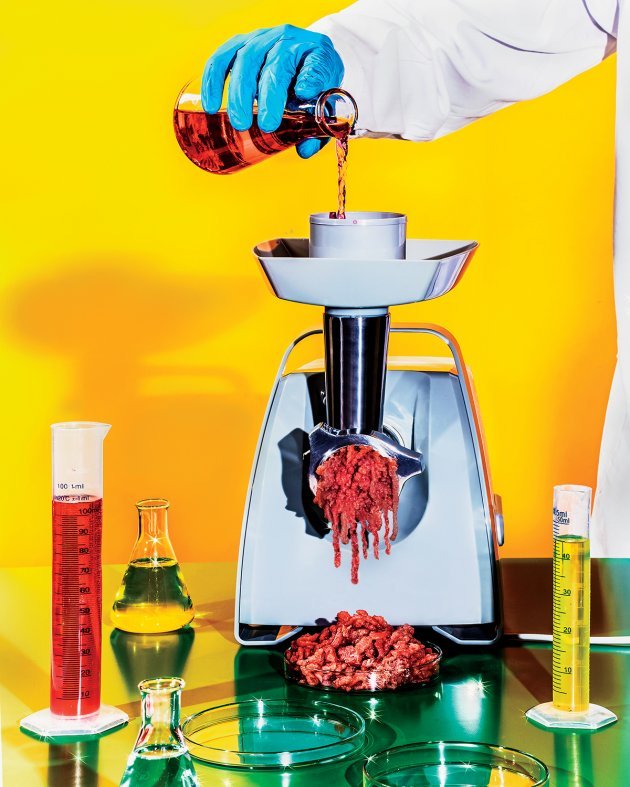 "I loved eating meat, but I didn't like the way it was being produced." --Uma Valeti, the vegetarian co-founder of the lab-meat startup Memphis Meats. CREDIT: Maurizio Di Iorio, INC Magazine

The Future of Meat

The future of meat seems to be a curious one. More and more, companies are trying to eliminate a part of meat production that seems to be, well, essential: the animal itself. Many are starting to argue that, on the contrary, the animal is not essential to the production of the beef, pork, and chicken so widely desired by consumers, and with the increased utilization and development of technology already available, stores in the near future will be able to carry what the industry has dubbed clean meat, that is meat that has been created without the life of an actual living organism, and do so at a comparable price to traditional meat products.

With drastic population increases in countries like India and China, the demand for meat worldwide has never been higher (WorldWatch). Global consumers spent over a trillion dollars last year on meat products, and that number is expected to double in the coming decades (NPR). In order to meet these skyrocketing quotas, livestock production has reached staggering heights. There are currently 1.3 to 1.5 billion cows grazing around the globe right now, and nearly 19 billion chickens (Quora). This immense number of cattle and other livestock has created many problems, ranging from terrible conditions for the animals to detrimental conditions for the environment.

Methane accounted for 16% of global greenhouse gas emissions in 2015, according to the Intergovernmental Panel on Climate Change (IPCC). The methane in the atmosphere, which is 23 times more powerful in its contribution to global warming than carbon dioxide, is mostly made up from emissions by the billion or so cattle around the world (IPCC). The production that works to satisfy our ravenous global desire for meat is itself seriously damaging the environment, both by taking up and damaging arable land with livestock, and with the pollution that the livestock inevitably create. And as the human population grows larger, this environmental problem will become inescapable.

Our current system of meat production is not sustainable as is, not to mention what will happen as the population grows even further over the coming decades. Already, nearly sixty percent of the world’s agricultural land is devoted to raising or grazing animals meant for consumption (UN Food and Agriculture Organization). As the global demand for meat rises with the population, we will soon either run out of land and not be able to produce enough food, leading to starvation, or destroy the land we do have with cattle-based pollution, leading to starvation. With so much capacity for production, and with all the modern technology at our fingertips, there must be a way to both satisfy the global demand for meat, while at the same time not incurring the massive environmental and ethical costs of raising such animals just to later slaughter them for their parts.

In 1931, when asked by The Strand magazine what he thought would happen over the next fifty years, Winston Churchill said, “We shall escape the absurdity of growing a whole chicken in order to eat the breast or wing, by growing these parts separately under a suitable medium." And that is exactly the idea behind cultured meat, a revolutionary new technology that has already spawned several startups that have managed to garner funding from names like Bill Gates and Richard Branson.

The idea behind cultured meat is different than vegan meat or other plant-based protein substitutes. Where those items try and mimic meat in design, texture, and taste, cultured meat really is meat, it’s just missing one thing -- the animal.

Memphis Meats is one of the pioneering companies in this emerging technological field. Founded by three scientists in 2015, Memphis Meats has managed to create meat products using only animal cells; no living organisms are involved. The meat is all grown in a lab using advanced biotechnology to stimulate stem cells into differentiating into muscle tissue. This muscle tissue is then cultured in bioreactors to produce genuine meat without having to raise, feed, and slaughter a living pig, chicken, or cow.

In August 2017, Memphis Meats managed to raise over $15 million in funding (Forbes). Prior to this round of investment, their products were quite pricey: $9000 a pound for cultured chicken and $18,000 a pound for cultured beef. However, as of June 2017 Memphis Meats has announced that they have managed to get production costs to under $2,400 a pound, and told investors that as they increase their scale and refine their method, that price will continue to significantly drop (Memphis Meats). In fact, this March, Memphis Meats -- based in the Bay Area -- unveiled a small pop-up restaurant where they invited guests to try their lab-grown chicken strips (Washington Post). And, according to those that tried the cultured meat, it did in fact taste just like chicken.

While $2400 a pound is obviously still much too high to be able to be found in your local grocery store (except maybe Whole Foods), Memphis Meats has moved beyond the proof-of-concept stage and into the refinement process. The technology they have developed has shown true potential, and the data backs up the usability of such a technological advancement. Production of clean meat has also already shown some amazing progress in just the short amount of time the technology has been around. Although $2400 a pound for lab-grown beef seems expensive, it is a huge reduction from the $300,000 price tag of the first ever clean meat hamburger, which was produced by Dutch scientists in 2013 (BBC).

The Memphis Meats process uses 90% less water and up to 99% less land than traditional agricultural methods. More so, it prevents the mistreatment of animals and the environmental degradation caused by the raising of livestock by removing this very dirty part of where the meat on our table actually comes from. In an article published by INC, one of the Memphis Meats founders, Uma Valeti, sums it up: “I love eating meat, but I didn’t like the way that is was being produced. I thought, there has to be a better way.”

And the method that Memphis Meats is employing seems to be much more effective than methods utilized in the past to try and stem the global desire for meat. Where other companies have sought to replace meat in people’s diets with their soy- or plant-based alternatives, Memphis Meats is the first company committed to providing real meat, just without any of the animals. In this way, it will be easier for Memphis Meats products to break into the mainstream, because the company won’t have to convince anyone to give anything up. Rather, it will present them with the same thing, just produced differently. And lab-grown meat has other health benefits over traditional meat as well; because it is produced in a sterile environment, there is no chance of foodborne bacteria in clean meat. According to the CDC, these pathogens in conventional meat are the most common sources of fatal food-related infections.

The idea that we could grow limitless quantities of meat in a space no larger than a laboratory is extremely attractive to governments and companies. To eliminate the need for land and living animals will truly revolutionize the way people consume their food, and maybe, is just the revolution we need in order to continue to feed the growing global population. Perhaps, Memphis Meats will usher in the future of meat, leading to a new era of food.

Works Cited →
The Future of Meat